Even though Unity comes with a decent script editor (Mono), a lot of people like to use another one instead. This short article explains how to change the script editor and introduces a few alternatives to Mono.

In case you are wondering what a script editor is: it's what Unity opens when double clicking a script. The default script editor that comes with Unity is Mono: 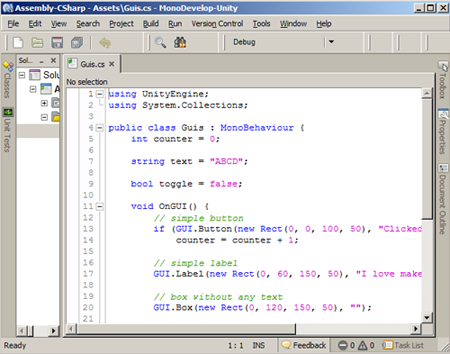 If we want Unity to use a different script editor, all we have to do is go to Edit in the top menu, then select Preferences and then go to External Tools: 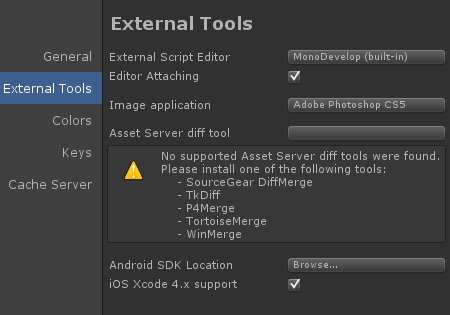 Here we can select one of the editors that Unity detected automatically. After selecting the editor, try to save the scene and restart Unity until it works properly (this is still buggy sometimes).

Note: if your editor is not in the list, just select Browse... and find the editor's .exe file manually.

Most of the programmers that use a Windows operating system usually have Visual Studio installed, which should be detected by Unity automatically. Visual studio is a decent alternative to Mono. It works pretty good, it has decent syntax highlighting and a lot of customization options like auto completion.

The great thing about Unity's Visual Studio support is the code help tool (sometimes called intelli sense). So if you write something like "GUI." in Visual Studio, it will automatically show that little window that shows all the Unity GUI functions and variables.

The downside of Visual Studio is that it won't highlight Javascript properly. Besides that, Unity sometimes still has trouble to open Visual Studio properly when double clicking a script, but that will surely be fixed some day.

If you like it simple, the Notepad++ text editor is a great choice. Basically it's a lightweight text editor with syntax highlighting, that just doesn't suck. Besides that, it also comes with a few nice features like word count or converting tabs to spaces and such.

The great thing about Notepad++ is that it works with all the scripting languages that Unity currently supports. C# and Javascript will be detected automatically, and if you are working with Boo, try to go to the Language menu and select Python, this should highlight the syntax good enough.

Another plus point is that it just works properly every time you double click a script in Unity. It always opens the Notepad++ in no time and displays the script properly.

The only downside of Notepad++ is that this little code help window is not that perfect. It can be enabled at Settings->Preferences->Backup/Auto-Completion->Enable Auto Completion, but it won't show you all the functions that Visual Studio or Mono show you when entering something like GUI. or anything else that is a Unity specific function.