In this Tutorial we will learn how to use the Boo language to make games in Unity. If you are completely new to Boo, feel free to also read the BooPrimer.

Let's talk about the Boo language really quick before we jump into the code. Boo is pretty much Python with types, based on .NET (just like C#). The big selling point of languages like Python and Boo is that we can solve problems with a clean syntax and fewer lines of code. Things like functional programming support, the colon operator (slicing) and ridiculously elegant code are the reason why Boo is awesome.

Creating a Boo Script in Unity

First things first. Unity 5 does still support Boo, but it removed the "Create Boo Script" option from the menu. So in order to create a Boo Script, we can either manually create a ".boo" file in our Assets folder or use a simple Editor Extension that allows us to create Boo Scripts again:
CreateBooScript.boo
Note: right click the link, select Save As.. and save it in a new Editor folder inside our Project's Assets folder.

Afterwards we can select Assets->Create->Boo Script from the top menu: 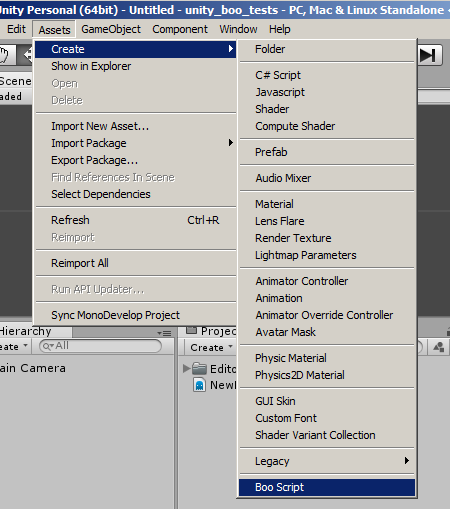 Note: our Editor Extension that allows us to create a Boo Script is actually written in Boo.

And then rename it to Test:

Afterwards we will open the Script.


Note: It's important to understand that Boo (just like Python) uses indentation instead of curly brackets.

After saving the Script, we can select the Main Camera and press Add Component->Scripts->Test in the Inspector. Afterwards we can see our Boo Script as component: 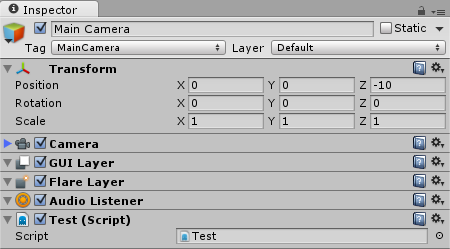 If we press Play then we can see our test message in the console:


Note: the [of Type] construct is the equivalent of the <Type> construct in C#.

Using Variables and showing them in the Inspector

Here is how we can add a variable to our Test Script:

We can (and often have to) define a type for it:

We don't even have to assign a value yet:

We can also make it visible in the Inspector:

Here is how it looks:

It also works for arrays:


Note: (int) means Array of int. Please note that we can't make Lists visible in the Inspector (yet).

Here is how it looks:

And a few more datatypes:

We can access Unity's libraries just like we do in C#. For example, here is how we can use Input:

And here is how we can use a function from a C# library:

For some libraries we have to use import (the equivalent to C#'s using):

We can use public, protected, private and static just like in C#:

We can even use C#'s accessor construct:

We don't have a new operator in Boo, but we can still create a new GameObject easily:

Unlike Python, we actually have to use types most of the time. Let's say we want to use the OnCollisionEnter2D function. Here we always use a "variable as Type" construct:

We can use for to loop through each item in a list:

Just like in C#, we can use using to work with disposable objects:

Some of the Unity classes allow us to add our own callbacks so that Unity automatically calls them every few milliseconds.

One example is the EditorApplication.update Delegate. In C# it's as simple as this:

It also works in Boo, but we have to use the Delegate.Combine function and some type casting:

Let's take a look at a few things that can't be done in C#.

Slicing aka the Colon Operator

Languages like Boo and Python are really good with lists. We can use slicing to extract parts of a list very easily:

List comprehensions are an incredibly powerful language construct that is often found in functional languages. It can be used to replace lots of for-loops and of course, Boo has it too:

While Boo doesn't come with many higher order functions by default, we can still define the 3 essential ones that are found in just about every functional programming language:

Those three functions are everything that we need to replace every long and ugly for-loop. Examples:

The { } constructs are lambdas, which are just functions defined in a short way. We can also use real functions if we want to:

We can even use reduce to create a useful sum function that sums up every element in a list:

Or the lambda version:

We only used a few very simple examples with numbers, but it's important to understand that higher order functions are a huge selling point for Boo and any other programming language that supports them. As mentioned above, we can replace every for-loop with map, reduce, filter and function compositions of them. This is what makes our source code so much more elegant and short.

We just learned how to use Boo to interact with Unity and we got a first impression of the ridiculously elegant syntax.

There are lots of reasons why Boo is a great option for game development. We use a game engine like Unity because we want to focus on developing the game instead of developing the engine. It's the same concept that will make you fall in love with Boo. The language makes our code shorter, more elegant and allows us to focus on the game instead of having to write lots and lots of ugly code.

Note: also if you are into functional programming concepts, then Boo is the obvious choice when making games in Unity.