When making a two dimensional game, everything that has to be positioned in the game world needs a Vector2 class. A Vector2 in its most basic form only consists of an x and y value as floating point numbers (float in Java). It can be used to store a position, to store a movement direction, a rotation and much more.

About Points and Directions 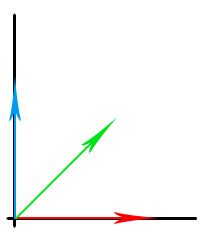 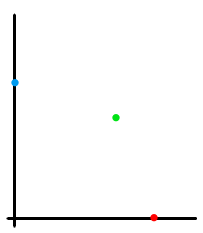 The red direction and the red point are the exact same vector, the same applies for the blue and the green ones. For the beginner its easier to think of it as a point, but we need to keep in mind that theoretically its a pointer.

Implementation of the basic Class

Let's create the basic Vector2 class consisting of the x and y value, a constructor and a compare function:

We created two constructors. The first one can be used like this:

The second constructor let's us create a new Vector2 while already setting the x and y values:

Let's create a vector and then modify its y value afterwards:

If we want to find out if two vectors are equal, we can do it like this:

It's important to compare them with v.equals(w) instead of using v == w. The == operator compares the object, the equals function compares the x and y values (which is what we want).

Very often we will have to calculate the distance between two points in the game world. Let's take a look at a graphic: 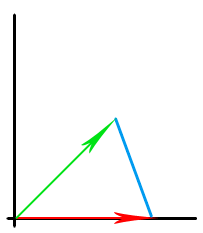 The red and the green arrows are our two vectors. The distance between those is the blue line, or to be exact: the length of the blue line.

The distance calculation algorithm is following the same concept every time for Vector2, Vector3 and the rest. If you are interested in how it works, please take a look at the Euclidean distance Wikipedia Article.

Let's implement it. The following function will be put into our Vector2 class:

The distance in this example is exactly 3. Feel free to draw it on a paper to see it in a better way.

We will need to normalize a Vector2 sooner or later for certain computations. What normalize does is keeping the vectors direction while setting its length to exactly 1. To understand this we will look at two graphics: 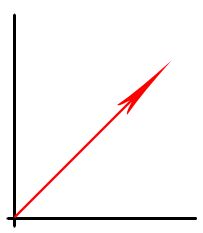 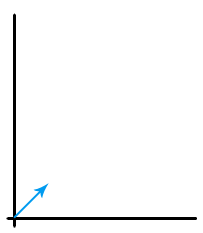 Let's implement it. All we have to do is find out the vector's current length and then multiply x and y by 1 / length:

Here is a usage example:

This example modifies v to (1.0f, 0.0f), exactly as it was planned. Feel free to draw it on a paper, then you will see the effect a bit better.

The result is a very simple to use Vector2 class that comes with the most commonly used functions. Now it's time for you to add a few more functions like add, scale or subtract accordingly.