Let's say we want have an algorithm that increase a variable by one, and then multiplies it with two, then divides it by three, then subtracts four from it.

Since we already know C++ Variables, we could do it pretty easily like this:

Reminder: to see what value a variable has, we can use std::cout<<a; any time.

Now that's a lot of work for doing the same thing over and over again...

We could make our life much easier if we would put the algorithm into a function:


Here is what happens:

There are a few things to know about functions:

Here are a few examples of all kinds of different functions:

Let's take a look at our increase function again:

There is one more thing to know about this: the variable n only exists within the function, or in other words, we can only use n between { and }.

So this does not work:

Please don't get scared by the explanation of the two concepts, in the end they are kinda optional, but it's good to have read about them once.

Generally speaking, there are two types of functions:

For example, our increase function above takes something and then returns whatever it took, increased by one:

The important part is how we use it:

In the above example, a is passed as a parameter into the increase function, but it is never modified. In the end, a is 0 and b is 1.

What happens behind the scenes is this:

Here is the way that our a travels: 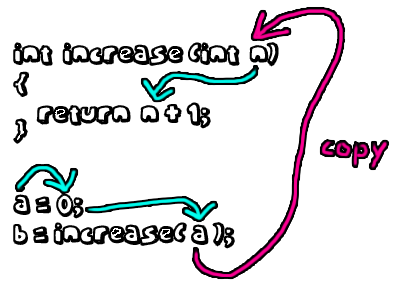 As we can see, a never goes inside of increase, instead it's copied into n.

Call-by-value is just that. It means that when calling a function, the parameters become copies of whatever we passed into it.

The counter-part is this:

Again, the important part is how we use it:

In the above example, a is passed as a parameter into the increase function directly, without a being copied. We did this by naming our variable &n instead of n. & means it's not copied.

Here is what happens behind the scenes:

Here is the way that our a travels: 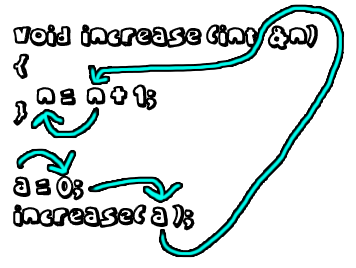 As we can see, a goes all the way through increase, and even though we named it n for a while, we still work with a. All this happens simply because we put a & sign in front of our parameter.

The whole call-by-value and call-by-reference thing can be confusing.
Here is a final overview:

If you love simplicity then stick with call-by-value until you fully understand C++.

Good news: now that we know Data-Types, Variables and Functions, we have a solid knowledge of the C++ fundamentals and we can already write some simple programs!