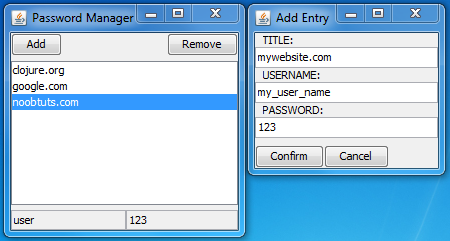 As usual we will focus on plain simplicity. Additional features like save & load will be left open for the reader to implement afterwards.

As just mentioned, we will use the seesaw library for our GUIs. Seesaw is pretty much just a wrapper for Java's Swing library, but wrapped in a way that allows us to use it in the most elegant way possible in Clojure.

Reading through the Seesaw REPL Tutorial should be enough to understand everything in this tutorial.

The library can be used by adding the following line to our project.clj file:

And then adding it to the use part of our namespace:

Note: we will also need clojure's string later on, hence why we already added it to the require part as well.

And then (optionally) calling the native function in the very beginning of our program:

Note: this makes the GUI look like a native GUI from the operating system, instead of that blue Java GUI style.

We will begin by implementing two little helper functions that will make our lives easier later on:

The display function can be found in the tutorial that was referred to above. The yesno-dialog function simply pops up a dialog with a Yes / No answer option, while also letting us specify the shown message.

Here is how we use it:

Alright so our password manager will have a whole bunch of entries for all kinds of websites. Each entry should then have an id (or in other words: username) and a pw (or in other words: password) field, so what we need is a hash-map of hash-maps like:

Our entries should also be changeable later on (after adding or removing entries), so we will use a Clojure ref for them. Here is how we work with a ref:

Note: we will use a ref because the dosync mechanic could come in handy when adding more advanced features to the password manager.

Alright so let's define our entries:

We will need two windows in our software, which are called frames in seesaw. There will be the main frame and there will be an add frame: 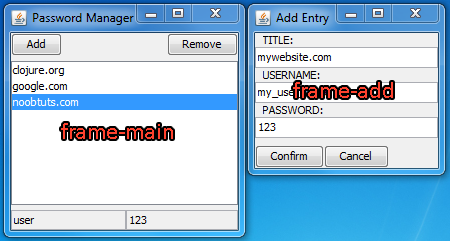 So let's define both frames and make one of them quit the Password Manager:

Now there is a very basic way to show a frame, which is this one:

It's time to add the main listbox that shows all the entries. It's important to keep in mind that it only shows the entry titles (for example the website name), but not the id or password.

We can get all the entry titles very easily like this:

And here is how we define the listbox: